Thank you for picking Uranus!

That's the cheerful greeting heard as I entered the Uranus Fudge Factory, a delightful tourist spot found on old Route 66 full of fudge, whimsical t-shirts, and remarkably cheerful staff. Outside, a giant neon dinosaur atop a colorful, highly stylized science-fiction-like rocket from the ‘60s greets you as you pull into the parking lot, a stunning example of the roadside oddities that made Route 66 “The Mother Road.” 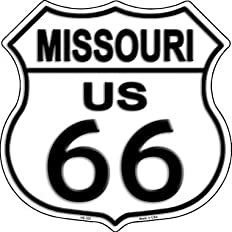 Few things have inspired us to wander farther quite like Route 66, which originally wound from Chicago to Los Angeles. Songs, movies, buried Cadillacs, giant blue whales, and giant steaks are just a few of the things that entered our culture from trips made down Route 66.

Route 66 was born on April 30, 1926, in Springfield, Missouri, which just also happens to be the location for this year's BMW MOA National Rally. The route itself begins just a few blocks from the rally site, and there are a number of historic monuments and other excuses to get your kicks on Route 66 while you're at the rally.

Muffler Men, quaint little roadside hotels, original survivor diners, Route 66 museums, and even the original Reds Giant Hamburg sign are all spots to visit along Route 66 in Springfield. The Bass Pro Shops World Headquarters is also just a few blocks off the original route of Route 66, while a slightly longer detour will take you to Lamberts Café, the home of throwed rolls, in nearby Ozark. Other interesting restaurants include the Black Sheep Café (known for amazing hamburgers), Gailey's and their superlative breakfast, or Casper’s for burgers and chili.

If you're tired of Springfield, wander south down Missouri 125 to Peel's Ferry for some of the best curves anywhere. If your GS is a bit too clean, stop off in Chadwick and get it properly dirty on the way, or just go to Chadwick OHV to start with. If Peel's Ferry is too close for your riding style, wander farther down the Pig Trail (AR 23) to the small town of Oark, Arkansas, for world-class pie, or simply wander any of the wonderful roads in southern Missouri and northwestern Arkansas.

I hope you'll Wander Farther with us at the Ozark Empire Fairgrounds for the 49th BMW MOA National Rally. Regardless of what sort of wandering you want to do on your motorcycle, Springfield, Missouri, is a great place to begin your ride.