One of the ways the 2022 BMW MOA “Wander Farther” National Rally is helping celebrate the 50th Anniversary of the MOA is through our selection of a beautifully restored, 1972 BMW R 75/5 in Monza Blue as our prize bike! We picked this model specifically as it was typical of what you would have ridden home from your BMW dealer in ’72, the year the BMW MOA was founded. Usually, that in itself wouldn’t be significant enough to draw any attention, but the Slash 5 was not just any motorcycle, as many believe it was essential for the success of BMW motorcycles, the BMW MOA and the BMW motorcycle community at large. Without it, we likely wouldn’t be here. 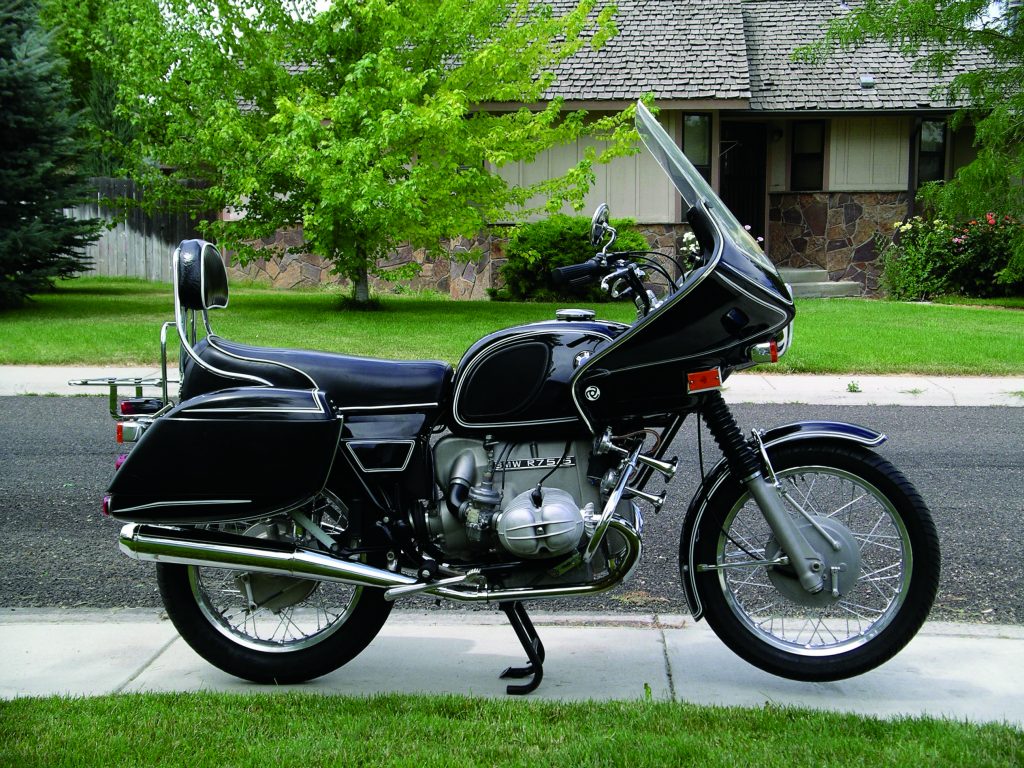 If you weren’t riding in 1972, it’s difficult to understand just how much the motorcycle world has changed in the past 50 years. By 1969, the Japanese manufacturers were making great progress into the (then) large displacement market (i.e., 750ccs). Honda had introduced the CB750 in 1969 to worldwide acclaim. With an overhead cam, in-line 750cc four-cylinder engine, beautiful paint, much chrome and polished alloy and a front disk brake, it made all competitors look outdated virtually overnight. At the time, the British brands were clearly in decline and wouldn’t make it to the end of the ‘70s, and it wasn’t the best times for Harley, either. The only European brand of any consequence in the U.S. was BMW, and their future was far from certain.

In the late 1950s, BMW’s top-of-the-line sport bike, the R 69S (a /2 series model) was based on the R 60/2 introduced in 1955 and sported an Earles fork (leading link) front suspension, four-speed transmission and six-volt electrical system. The R 69S was introduced in 1961 with a whopping 42hp, 600cc engine. True telescopic front forks were introduced in 1968 for the “US” model. Not counting the single-cylinder R 26/27 bikes, only about 68,000 units of all BMW /2 models were built world-wide during their 15 years of production, an average of only 4,500 units per year, and sales had steeply declined toward the later 1960s. Please don’t hang me if you have different sales numbers than these as there is a lot of difference between “expert” web sites. The point is that BMW motorcycle retail sales were in steep decline by 1969 because the bikes were no longer competitive. BMW had to do something to get back into the game or fold their cards.

That something was the introduction of the Slash 5 series introduced for the 1970 model year. These bikes, revolutionary by BMW standards, introduced the completely redesigned 247 series engines, the first such change in a decade and a half. The cam shaft was set below the crank to raise the cylinders for more sporting ground clearance. The 750cc engine produced 50hp and used modern constant vacuum (CV) slide carburetors. They had a modern frame with the recently introduced US model telescopic forks. An electric starter was spun over by a 12-volt electrical system with an alternator rather than a magneto. Emphasis was on performance, handling and modern technology. However, the Slash 5 was also a transitional model, as it retained several characteristics of the prior /2 bikes including a four-speed transmission, an instrument cluster sunken into the headlight nacelle (bucket), a kick starter, front and rear drum brakes (much upgraded, but still no front disc), and the infamous and historic “nail” key which fit any BMW motorcycle. By BMW standards, the Slash 5 was a giant leap forward, but would it be popular enough to succeed in the competitive market?

In a word, yes! The BMW faithful largely supported these new bikes, and BMW gained many new customers. During their four-year production run, BMW sold just under 69,000 Slash 5s, which is more than their total sales from 1955 through 1969! So, BMW kept building motorcycles. If the /5 would have failed, many believe BMW would have exited the motorcycle market, and without a supply of new bikes, the clubs, both local and national, would be gone.

But the reverse happened; sales grew and the Slash 5s led to more developed series like the Slash 6 and Slash 7 and beyond, known collectively today as the classic “Airheads.” The R 90S, a Slash 6 introduction in 1974, stood the motorcycle world on its head, as many consider it the first true superbike, and shortly after its introduction, race modified R 90Ses were winning AMA Superbike races. It appeared the “old man’s motorcycle” had come a very long way in six short years.

Remember though, that the “naked” Slash 5 was the only model BMW sold then and all the various “types” we expect now didn’t exist. What you got was your choice of color and displacement, with high bars and street tires. If you wanted a touring bike, you bought the accessories to suit yourself. If you wanted a dual-sport bike, you bought a small Japanese bike. However, almost all the iconic BMW motorcycle types we know today were developed from the Slash 5 linage including the R 90 S, the R 100 RS, the R 80 G/S and the R 100 RT. So, if you ride any BMW with an RS, RT, or GS designation, it is because the Slash 5 succeeded. With continued development, the classic Airhead with the 247 engine was available in the U.S. through 1995.

The large sales numbers of Slash 5s added thousands of new BMW riders and grew the local clubs. The BMW MOA was founded in large part to provide more and better information and communication between and among the local clubs and individual BMW owners. This is why 50 years after the Slash 5s introduction, I can write this story and you are here to read it.
Personally, in the spring of 1972 I knew very little about motorcycles in general, and nothing at all of the significance of some German motorcycle. I also didn’t know that the Yamaha bike dealership where I had just taken the position as parts manager had been a BMW dealer until 1970. More to the point, what I really didn’t know was that the combination of these things was going to change my life forever.

In ’72 I had taken the parts manager job for the summer off from college. Prior this, my only motorcycle experience was when my high school best friend three houses down got a very used Tahatsu which we managed to kill in about two weeks. Shortly after starting at the bike shop, I bought a used Yamaha 305 Big Bear. After about a month, I realized it’s many shortcomings, so I went big time with a shiny new Yamaha RD350—the two-stroke twin giant killer! I was happy, I thought, until a month or so later when a shipment of five new BMW Slash 5s showed up in impressive wooden crates. Unknown to me, my boss had decided to take on BMWs again and these bikes represented the initial order. That evening, the boss, the shop’s lead mechanic and I uncrated three Slash 5s, set them up and went for a long summer evening ride.

Everything changed for me that night. In less than 100 miles my priorities were completely reordered, and I had the second greatest experience of my life—or maybe it was the first. What I did know was that I wanted to have one of these motorcycles. No, that’s not strong enough, I HAD to have one—NOW—IMMEDIATELY!

This was in no way a rational decision, and in no way could I resist it any more than I could resist breathing. The next morning, I bought my very first BMW, deciding to lay out a year of college to pay for it. I had no plan at the time and hadn’t considered if this was a good decision when weighed against my other life goals. Hell, just riding this new BMW was now my life goal!

All those other things were for those poor souls who hadn’t discovered BMW bikes yet. I had my Holy Grail and life was good! And, yes, that bike did most certainly change the trajectory of my life in just about every way, not unlike how motorcycles, or a given motorcycle changed the lives of many of you. I absorbed BMWs and motorcycles in general like a vacuum cleaner and became the house expert on touring bikes and accessories and the lead BMW salesperson. Other than the sad facts that working in a bike shop is not the best move if you like to ride a lot in good weather and the money was poor, that was the best job I ever had.

Many of you know exactly what I’m talking about. Some of you bought a new Slash 5 and remember your excitement. Many more of you, having the curse of being born decades later, have come to these old bikes as rediscovered treasures which are now clearly seen as a high point in delivering the pure motorcycle riding experience with minimum complexity.
To Slash 5 owners, for the BMW MOA and for the Slash 5s themselves, we are asking that you bring your Slash 5 to the Springfield Rally! Bike condition is not a criterion, only the start of a good conversation. If you bought the bike new, bring it! If it looks like you just dug it up, but it runs, bring it! If it’s a daily rider, bring it! If you must or want to trailer it for any reason, bring it!

We are planning a special section in the traditional rally bike show for all Slash 5s, and we are planning on taking the largest Slash 5 (and rider) group photo ever created! We don’t have everything worked out yet, but if you have a Slash 5 or can get one in time, you really don’t want to miss this! Rally Chair Brian Burdette and my fellow Co-Chair Pat Carol will be riding their R 75/5s, and I will be there on mine as well—the very one I wrote about above.

These bikes were built to “Wander Farther,” so let yours take you to Springfield this coming June!