It was 2008 and the MOA Rally in Gillette, Wyoming, beckoned. My riding buddy Thomas had recently returned from Iraq and was still feeling the effects of the rapid-fire combat he’d experienced. Heading West from Chicago seemed like a great plan.

We saddled up and hit the road early one summer morning with the rising sun at our backs. We made southern Minnesota that afternoon, Thomas and I both riding K bikes. Minnesota has vast fields of wind turbines planted among the tall rows of corn waving in the breeze on both sides of I-90.

The next day we rode across South Dakota, toured the famous Badlands and the endless Thunder Basin National Grasslands, where you can see the curvature of the earth at the horizon.

Eventually we made our way to Gillette and the MOA Rally! I’d never seen so many BMW bikes in one place in my life. We were quickly identified as newbies and pressed into service in a volunteer role (Everyone should chip in and volunteer – though as an Army guy, Thomas volunteering is probably against some basic rule). 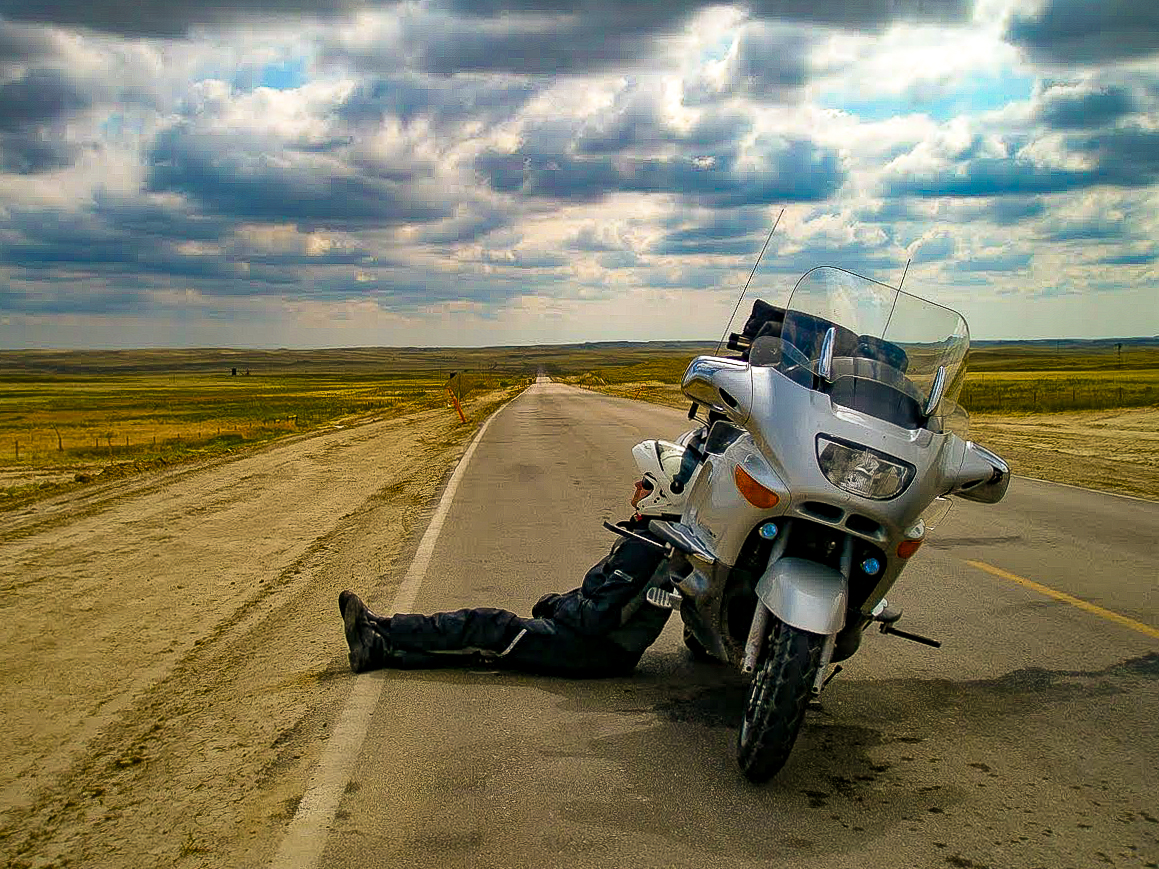 We set up our tent – or more accurately, Thomas had his wife buy him an air mattress since he was still recovering from a back injury incurred in the Green Zone. As an experienced camper I’d sent him a link for a perfect insulated inflatable mattress that would fit inside my tent. The mattress Caroline bought him appeared to be queen-sized, and not only wouldn’t it fit inside my tent, it could probably sleep three people in a pinch. Unfazed, Thomas strung up a lean-to tarp over his giant mattress, and placed his OD sleeping bag and bivvy sack on this giant mattress in an effort to anchor it against the growing wind out of the west. Maybe there is probably an Army thing against sharing tents, too.

We had dinner, and a few beers, and went back to find our sleeping area. The wind was now picking up in fitful gusts. I looked skeptically at Thomas’ sleeping rig and then bedded down in my compact two-man tent, zipping the door shut. The clouds to the west still looked menacing.

At 0300 sharp all hell broke loose, a torrential rain band swept over the campsites and the wind probably kicked up to 50 MPH. Thomas’ tarp rig vanished to the east, various bikes on center stands tipped over in the mud and his giant mattress was transformed into a pool, with him in the center soaking up the cold rain. I was bracing my tent against the wind and I heard Thomas ask if he could come in. He may have knocked or shouted – I couldn’t hear anything against the wind and rain.

Adventures come in many forms. We emerged the next morning and joined the folks cheerfully waiting for their morning coffee. We attended seminars, toured the vast vendor hall and then headed up into the beckoning mountains, where we got delightfully lost on the narrow two-lane roads.