I was standing by the Schuberth booth at the Salem, Oregon, rally, contemplating whether I really NEEDED a new helmet. I heard two male voices behind me speaking Polish. Without really looking at them, I extended my ear to eavesdrop. After a moment, one of them looked at me and said (in Polish) “I think this young lady understands us.” I did, so I smiled back and we started talking. 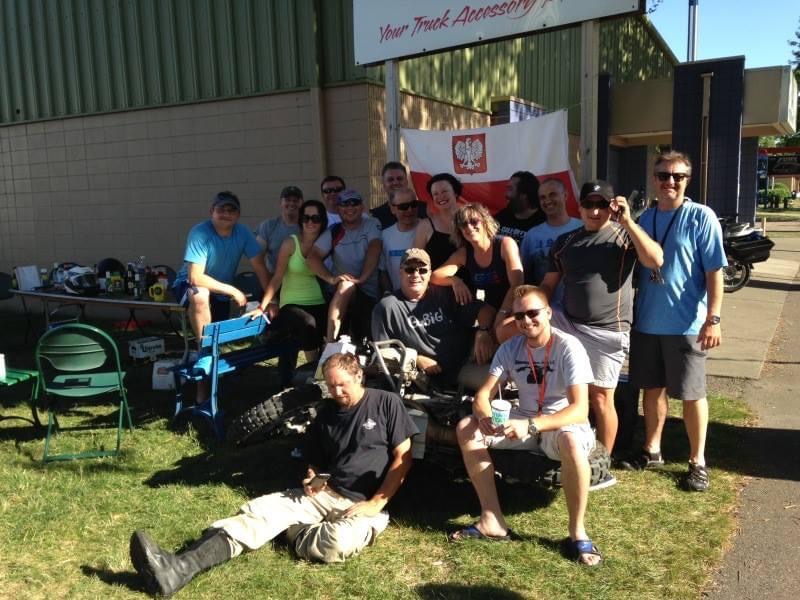 It turns out there is a whole group of Polish riders from all over North America (US and Canada) who for years have attended rallies and camped together in a group, getting up to all sorts of shenanigans. Sounded like my kind of trouble! Michal and Artur insisted I meet all of them immediately, so we walked over to their camping site, which was close to everything essential – trees, water, electricity, the beer garden and the vendors.

From afar, I saw their huge Polish flag hang up on the side of the building, a bunch of tables, tents and of course, loud voices and laughter! I met Arek, Grzesiek, Jacek, Marek, Michal, two Arturs, two Grzesieks, Rysiek – all big, burly, funny as heck men from my homeland. I immediately felt at home like with family, and I became “nasza” (ours). I was camping in another area; the next day, few guys came over, picked up my tent as it was, set up and with all my gear inside and brought it over to their site. They would not have it another way!

With a shot of vodka in one hand and a beer in the other, I reveled in their stories, their jokes that made me cry from laughter, the flattery, the little innocent innuendos that you do not get in North America. I was proud to earn their respect by telling them my stories of riding solo around the country on my R 1150 RS.

That was in 2013. Over the years, our group grew with a few others, like Wojtek, Darek, Lukasz, Remik, Patryk, their wives (Kasia, two Magdas and Julka), and we even now have little Brody, who was few months old when his parents drove with him to Utah. We still hang the same flag, bring gallons of beer and delicious coffee. Our tent is always open, and the vodka and beer are always cold. We will mock you mercilessly, but if you are a good, honest and funny person, you just made friends for life!

During the pandemic, we have been entertaining ourselves occasionally by having few drinks together over Zoom. On my wedding day last August, they all called me and Don to wish us love and happiness and to participate in our day, even for few moments! My American husband, Don, worried whether the group would accept him. I assured him that as long as he loves me, drinks with them and laughs with them, he is nasz*!

Many languages – including Polish – have masculine and feminine versions of words. In this case, nasza is feminine (for Karolina) and nasz is masculine (for Don).